We tendered through the Singapore government website Gebiz for the design, supply and installation of magnetic whiteboards and managed to win the tender based on a combination of price, experience and quality. Our whiteboards are popular as they are non-ghosting and printable with your own custom designs/grids and logos.

Our whiteboards and chalkboards are increasingly being used in kindergartens, schools and education centres. With magnetic walls, pins and screws are no longer required which keeps the environment safer for children. Our premium whiteboards are also popular as they are non- ghosting and printable with your own custom designs/grids and logos. We have state of the art printers that will give you sharp and colourfast printing. Increasingly we are providing customised inventive solutions for schools, incorporating aesthetics and functionality. See our Snakes and Ladders for Frontier Primary School 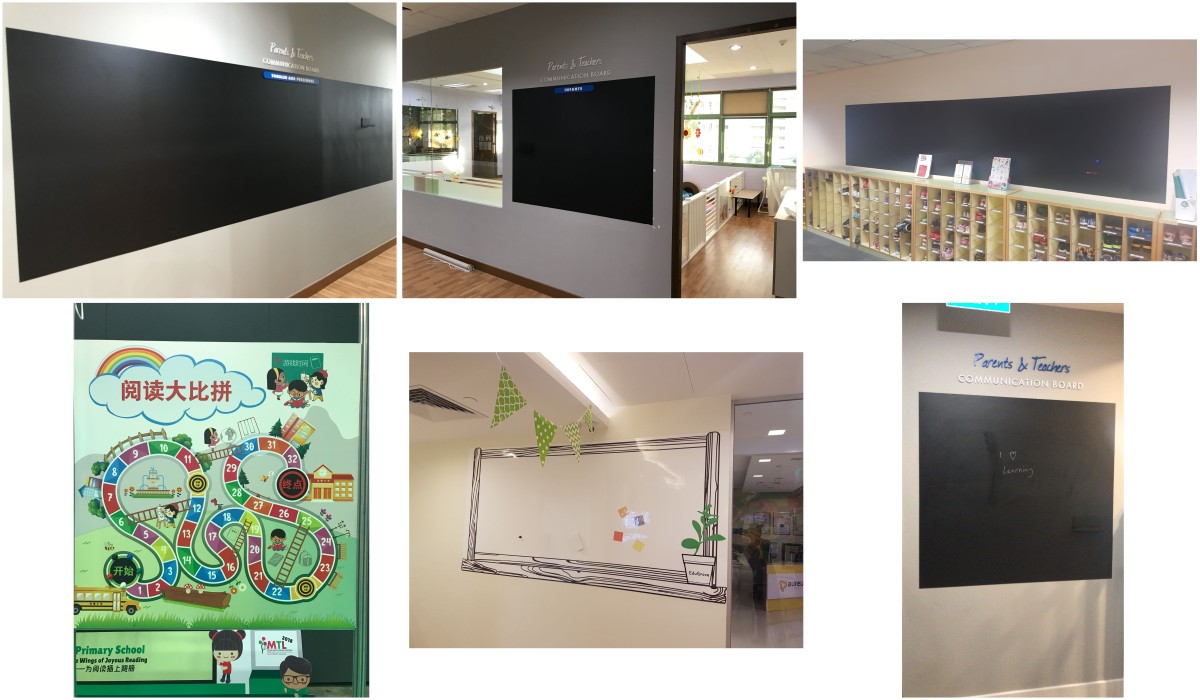 The Head of Music wanted a whiteboard that has the dual purpose of teaching how to read and write music with music scorelines and also act as a whiteboard. He also required magnetic pieces to be placed on the whiteboards. High quality printing was required as the lines had to be straight and also had to withstand a high degree of usage with music notes being frequently written and erased. Ten boards were subsequently commissioned. The magnetic whiteboards are from our US supplier, Visual Magnetics. 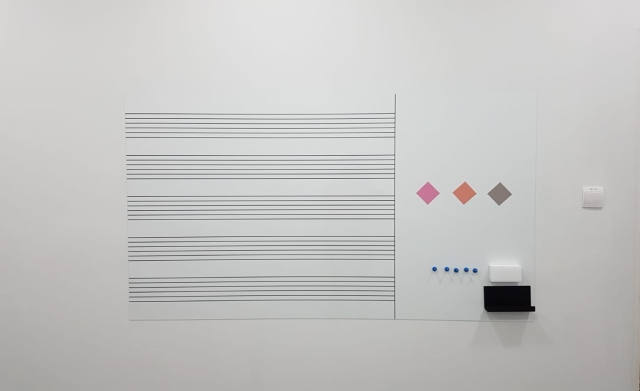 The financial services company wanted to have a world map where they could indicate their presence. They also wanted a system that was versatile enough that would enable them to update the map without changing the entire wallpaper if they were to have additional presence. We recommended our premium Visual Magnetics  patented Invisilock system from the US, which allowed magnetic overlays to be placed on the map so that changes can be made easily and inexpensively.

Want to transform your workplace to a community space? That’s exactly what the Workplace and Organisation Transformation Division of IMDA did. We were engaged to come up with interactive boards to create communal sharing. Two boards were commissioned, Scrabble and Snakes and Ladders, with magnetic pieces to be placed on the boards. In view of the intricacies, we had to use high quality uv printing and magnetic receptive media on the boards. The magnetic sheets were from our Visual Magnetics Collection. Our system components are 100% PVC-free, and many of our print substrates are made from 100% natural or post-consumer bases. 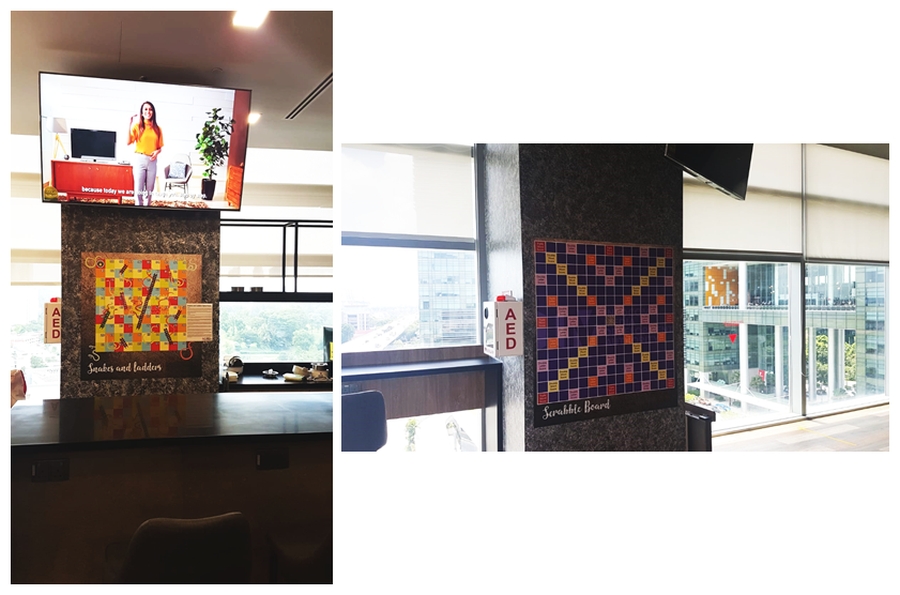 Shell was looking for a magnetic visual board with printed gridlines. They wanted something that could track project timelines and target dates easily. What was required was a visual board that would be versatile enough that names and timelines could easily be written on and erased. They also wanted something that would be durable and not have a “ghosting” effect. For this project, we used a self adhesive whiteboard on the glass panel and on a wall. Materials are from the United States from Visual Magnetics. 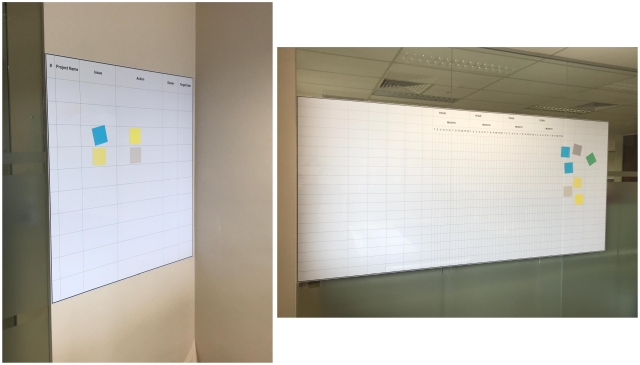 Client wanted high premium , high quality printed magnetic whiteboards to be placed in different conference rooms and a mobile board. The boards were printed with gridlines with different coloured columns to denote areas for specific inputs. For this project to ensure we met the stringent standards, we used our high-end uv printer to print on the high premium magnetic whiteboards from our US manufacturer, Visual Magnetics. 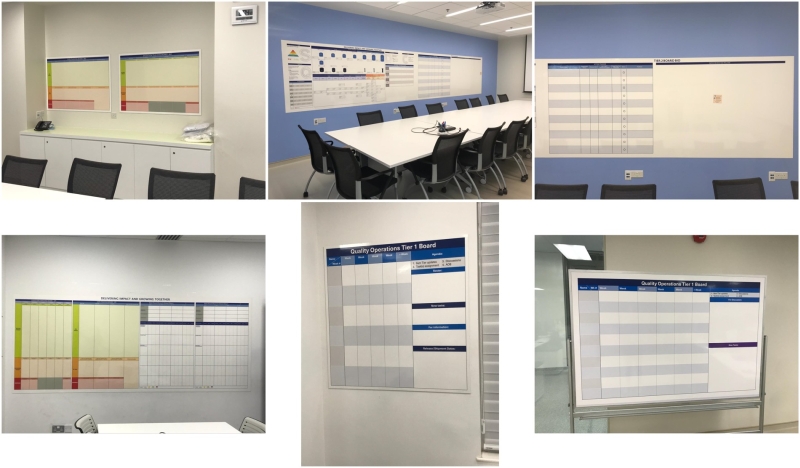 The School wanted to have a graphic display that could easily be interchanged with different pictures to evoke different emotions. We recommended our premium Visual magnetics system from USA which has high quality magnetic sheets.Our system components are 100% PVC-free, and many of our print substrates are made from 100% natural or post-consumer bases. Using our high quality printers, we managed to create a 3D art trick 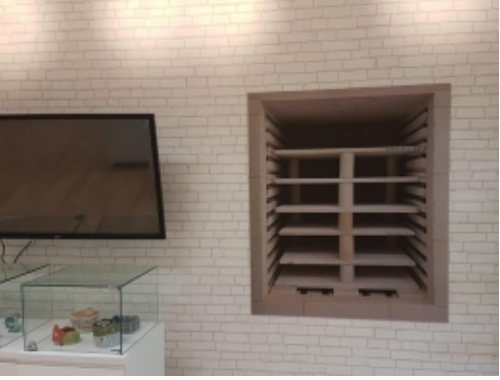 NTU wanted to create a wall mural featuring  a world map “Meet the World @Nanyang Technological University where they could indicate the nationalities that study or teach in their university.  They wanted miniature flags to be placed on the map. They also wanted a system that was versatile enough that would enable them to update the map without changing the entire mural. We recommended our premium Visual Magnetics  patented Invisilock system from the US, which allowed magnetic overlays of the flags to be placed on the map so that changes can be made easily and inexpensively. 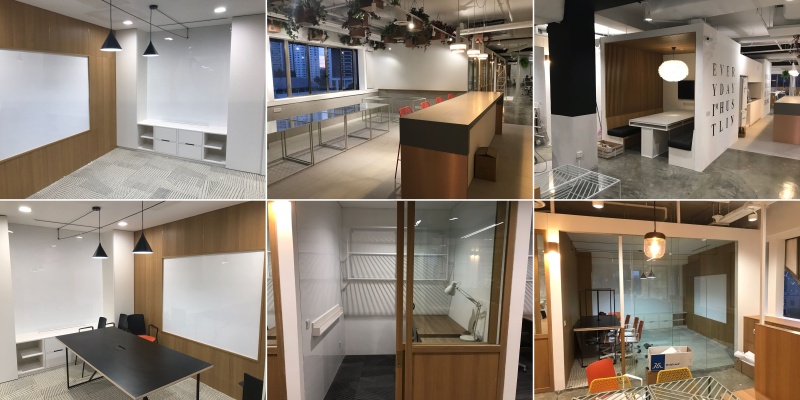 Our client wanted to have a versatile system that would allow them to change the graphics quickly as retail trends change or when they had promotions. A repeat customer, they have now used our services for a number of outlets. We have recommended our quality Polyedge and Polymatte magnetic receptive media range from our US supplier, Visual Magnetics. They are able to replace the graphics easily themselves at a fraction of the cost of an entire new installation using other retail graphic systems. 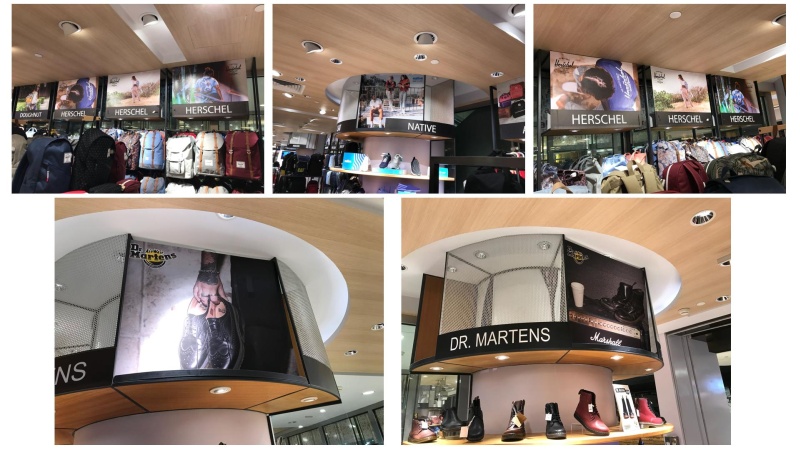 We were asked to bid for a project to provide a mobile display to celebrate Nurses Day for the Ministry of Health. This project was challenging as we had to construct a display that would be sturdy enough to be moved across 30 hospitals and polyclinics across Singapore. It also had to be able to withstand wear and tear as the display graphic could be damaged during transportation. We proposed an innovative magnetic graphic display system using the US originated Visual Magnetics System. The heart shaped design was fixed with Magnetic Invisilock and a graphic display was placed over it. At the same time they wanted students to write messages to be placed on the display in appreciation of Nurses Day. Traditional post-its would have been messy. We recommended magnetic notes that was printed into a flower design and which was writeable and erasable. Our magnetic display survived the journey and we have been invited in 2017 to change the graphic display without reconstructing the entire set thereby reducing costs for the client .

We tendered through the Singapore government website Gebiz for the design, supply and installation of a magnetic scrabble wall mural to be installed at Lakeside Primary School. The contract involved designing, supplying and installing of
1. Magnetic Scrabble Wall Mural and
2. Wooden Letter Blocks with Magnetic Backing for the Scrabble Wall at Staff Lounge for Lakeside Primary School.

With our innovative design, using the award winning Visual Magnetics Graphic Display System, we managed to win and got awarded the contract.
The advantages we highlighted are as follows: 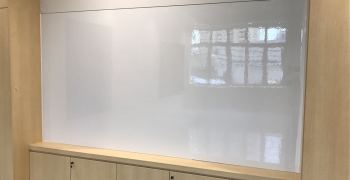 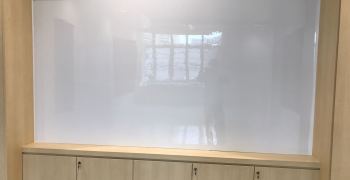 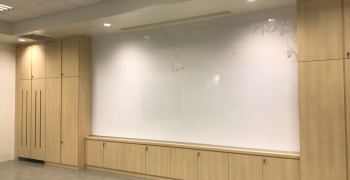 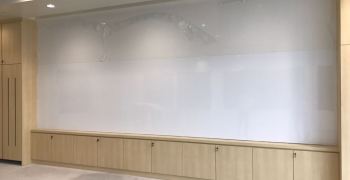 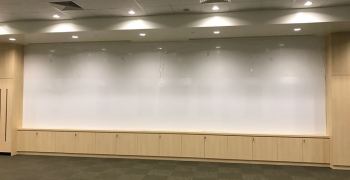 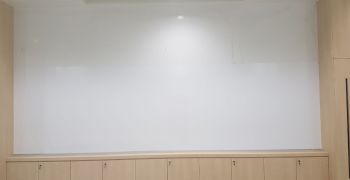 We installed 23 fully customised magnetic whiteboards for Nanyang Academy of Fine Arts. The longest was a 8.4mx1.45m seamless whiteboard. The whiteboards were installed over 6 floors with a total length of about 65m. This was an interesting project for us as we had to customise for different sizes and also had to custom fit in with the interior designer works. We worked with Life Interior Design Pte Ltd to install the project within a week. 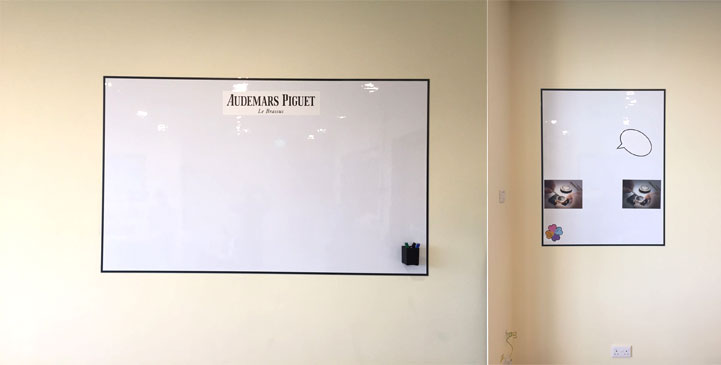 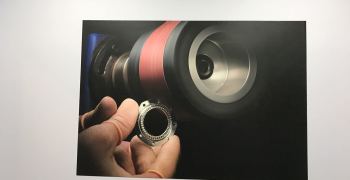 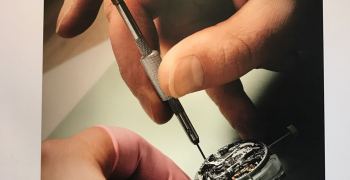 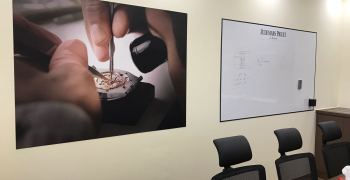 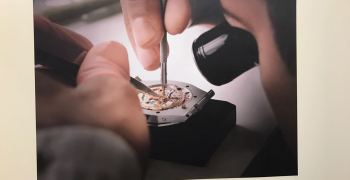 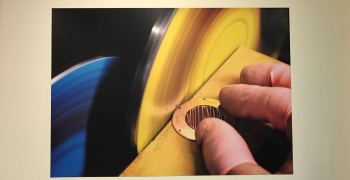 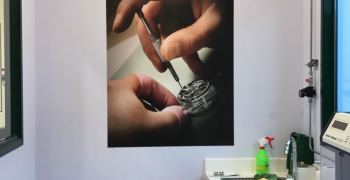 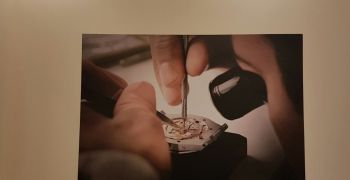 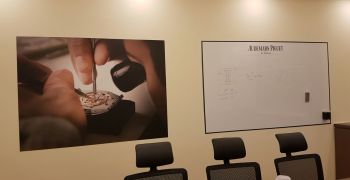 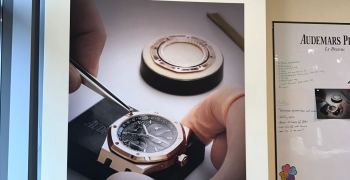 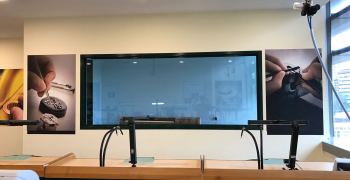 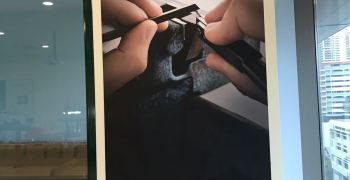 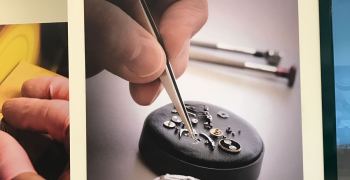 After installing a customised dry erase for AP in its office, we were also asked to use the magnetic graphic display system for posters. As they expected to have frequent change outs our system suited them as they could easily change the graphic overlay on their own thereby saving on installation costs. 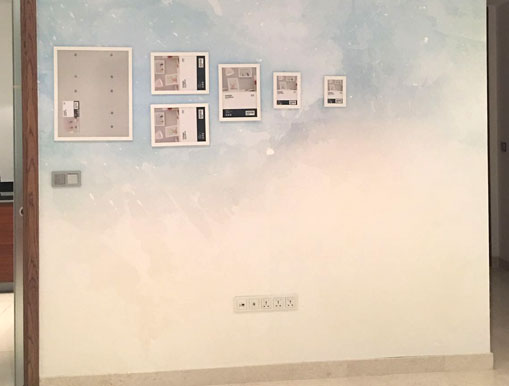 If you want to have your own wallpaper design or even a family photo on a wall, our visual magnetics system can do it for you as we use digital printing. No more worries about the wallpaper being out of stock or no longer in production. Just reprint the section and replace. No more messy stripping of wallpaper and scraping off the glue.

Our client wanted to have a wall where she could put up photo frames without damaging the wall. She also wanted the flexibility of inter- changing the wallpaper design. You can do up to 2-3 graphic overlays and simply roll it up to reveal another design below and roll it back on when you want it back. 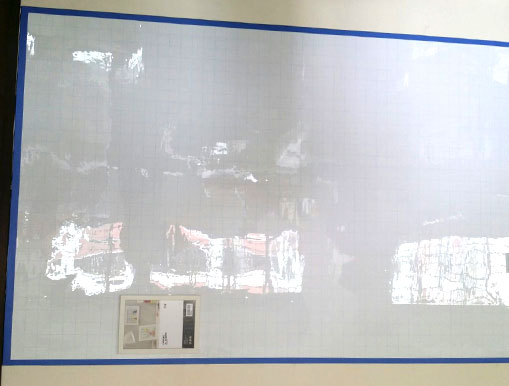 For those of us who have children, we know that children love to draw on walls.We want to encourage their creativity but not at the expense of our walls.To prevent damage, we have customised dry erase installations where we printed gridlines on magnetic dryerase(whiteboards) / You may ask what for? Practice writing Chinese characters ? Our system is printable, writable and non-ghosting. 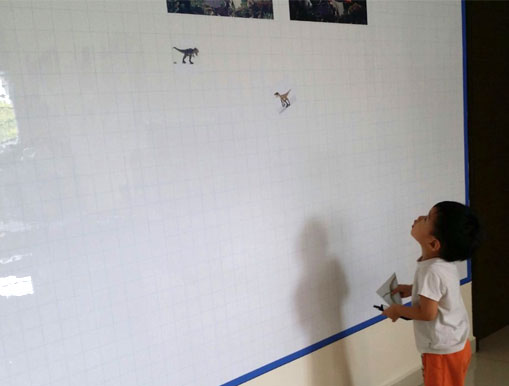 We even designed and printed dinosaurs on the dryerase as the family wanted a customised border.

Our system is so versatile that we even installed our magnetic dry erase into a study table. Your child can easily write his timetable on him and you can even write down messages for him!